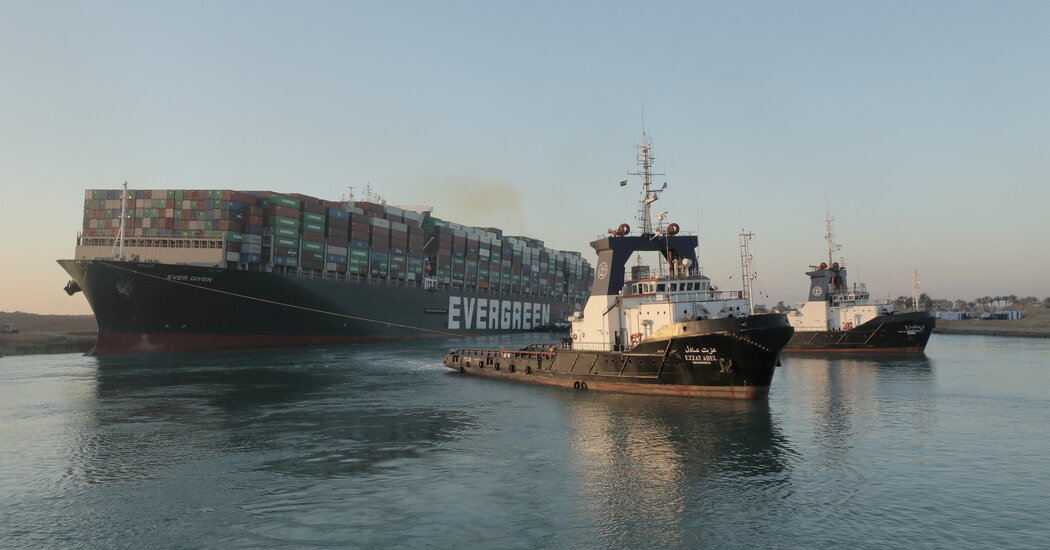 [Follow our live coverage of the stuck ship in the Suez Canal.]

The Ever Given, a 1,300-foot, Japanese-owned container ship en route from China to Europe that became stuck the Suez Canal for days, was freed on Monday after a round-the-clock scramble to unblock the shipping thoroughfare.

The 120-mile artificial waterway known as the Suez Canal has been a potential flash point for geopolitical conflict since it opened in 1869. Now the canal, a vital international shipping passage, is in the news for a different reason: a blockage affecting more than 300 vessels that sent tremors through the world of maritime commerce.

The Ever Given was partially refloated in the early hours of March 29, and by around 3 p.m., the ship had successfully been freed and appeared to be on the move, according to vessel trackers and observers at the scene.

Here’s what to know about the recovery efforts, how the vessel got stuck, and some basics on the history of the canal and how it operates.

What led to the vessel’s grounding, and how was it eventually freed?

The Ever Given, operated by Evergreen Shipping, is one of the world’s largest container ships, nearly a quarter-mile long. Buffeted by high winds and with poor visibility, it ran aground on March 23, and the authorities scrambled to free it for days.

The refloating of the ship on Monday raised hopes that traffic could soon resume in the canal. Salvage teams had been working on both land and water for six days, dredging sand and removing rock from both ends of the ship, which had blocked passage by any ship. Tugboats aided by a high spring tide eventually managed to move the vessel.

Salvagers had tried several remedies: pulling the ship with tugboats, dredging underneath the hull and using a front-end loader to excavate the eastern embankment, where the bow was stuck. But the vessel’s enormous size and weight — 200,000 metric tons — had made those salvage efforts difficult.

On Monday afternoon, tugboat horns blared as the ship again began moving on its own, finally shifting from its diagonal position across the canal.

What has the impact been?

The ramifications of the blockage in the canal, which is believed to handle about 10 percent of global maritime commercial traffic, have been huge. By the morning of March 29, hours before the Ever Given was freed, 367 vessels were waiting to pass through the canal, according to Leth Agencies, a canal services provider. Maritime industry experts have said that such a large backlog could take weeks to clear.

Shipping analysts estimated that the traffic jam had held up nearly $10 billion in trade every day.

The delays could prove very expensive for the owners of ships waiting to transit the canal. Some shipowners had already decided to cut their losses and reroute vessels around the Cape of Good Hope, at the southern tip of Africa, adding weeks to shipping journeys.

The owner of the Ever Given was already facing millions of dollars in insurance claims and the cost of emergency salvage services. The Egyptian government, which received $5.61 billion in revenue from canal tolls in 2020, also had a vital interest in refloating the Ever Given and reopening the waterway.

Where is the Suez Canal?

The canal connects Port Said, Egypt, on the Mediterranean Sea to the Indian Ocean via the Egyptian city of Suez on the Red Sea. The passage enables more direct shipping between Europe and Asia, eliminating the need to circumnavigate Africa and cutting voyage times by days or weeks.

It is the world’s longest canal without locks, which connect bodies of water at differing altitudes. With no locks to interrupt traffic, the transit time from end to end averages about 13 to 15 hours, according to a description of the canal by GlobalSecurity.org.

Who built the Suez Canal and when?

The canal, originally owned by French investors, was conceived when Egypt was under the control of the Ottoman Empire in the mid-19th century. Construction began at the Port Said end in early 1859, took 10 years to complete and required an estimated 1.5 million workers.

According to the Suez Canal Authority, the Egyptian government agency that operates the waterway, 20,000 workers were drafted every 10 months to help construct the project with “excruciating and poorly compensated labor.” Many died of cholera and other diseases.

Political tumult in Egypt against the colonial powers of Britain and France slowed progress on the canal, and the final cost was roughly double the initial $50 million projected.

Although the canal was originally engineered to handle much smaller vessels, its channels have been widened and deepened several times, most recently six years ago, at a cost of more than $8 billion.

Which country controls the canal now?

The British powers that controlled the canal through the first two world wars withdrew forces in 1956 after years of negotiations with Egypt, effectively relinquishing authority to the Egyptian government led by President Gamal Abdel Nasser.

What was the ‘Suez Crisis’ that nearly led to war?

The crisis began in 1956 when Egypt’s president nationalized the canal and Britain, along with France and Israel, invaded to reclaim control. But the assault failed when President Dwight D. Eisenhower refused to back the military intervention, a decision that underscored Britain’s decline to a second-tier power.

The crisis briefly closed the canal and raised the risk of entangling the Soviet Union and the United States. It ended in early 1957 under an agreement supervised by the United Nations, which sent its first peacekeeping force to the area. The outcome was seen as a triumph for Egyptian nationalism, but its legacy was an undercurrent in the Cold War.

The Suez crisis was also a theme in Season 2, Episode 1, of “The Crown,” the Netflix series about Britain’s royals, as the British prime minister at the time, Anthony Eden, struggled over how to respond.

Has the canal ever been closed since then?

Egypt closed the canal for nearly a decade after the 1967 Arab-Israeli war, when the waterway was basically a front line between Israeli and Egyptian military forces. Fourteen cargo ships, which became known as the Yellow Fleet, were trapped in the canal until it was reopened in 1975 by Mr. Nasser’s successor, Anwar el-Sadat.

A few accidental groundings of vessels have closed the canal since then. The most notable, until this week, was a three-day shutdown in 2004 when a Russian oil tanker ran aground.