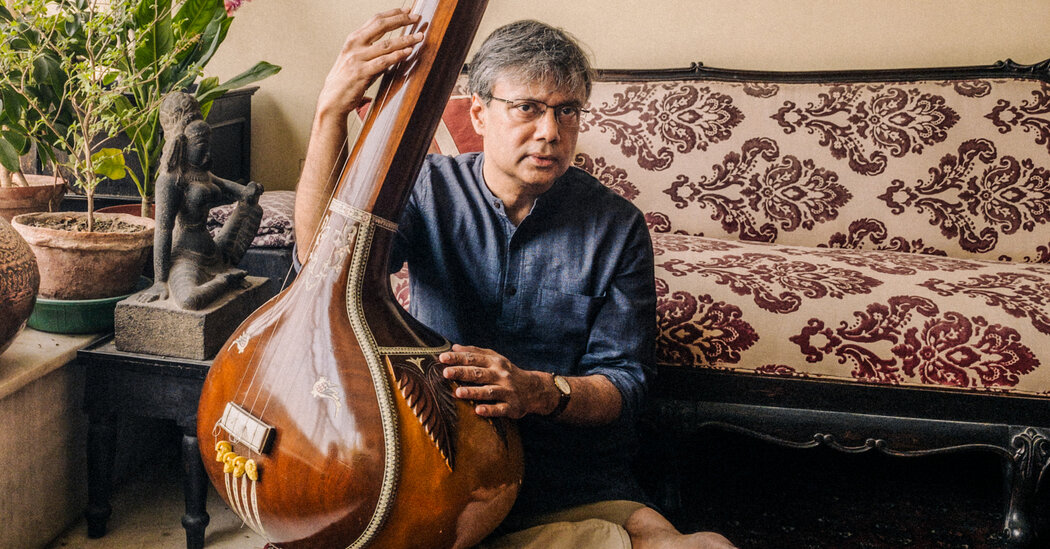 Amit Chaudhuri, an author and vocalist, blends memoir and music appreciation in “Finding the Raga: An Improvisation on Indian Music,” out now from New York Review Books. In it, Chaudhuri charts a personal journey that began with a Western-oriented love for the singer-songwriter tradition, followed by a headlong immersion into Indian classical music.

That heritage remained supreme for him until an accident of what he calls “mishearing” made him conscious of the elements shared by ragas and Western sounds — a realization that led to his ongoing recording and performance project “This Is Not Fusion.”

In the book, Chaudhuri reflects on the raga, the framework of Indian classical music. Resisting the urge to find an analogue to Western tradition, he writes: “A raga is not a mode. That is, it isn’t a linear movement. It’s a simultaneity of notes, a constellation.” Elsewhere he adds that it is neither a melody nor a composition, neither a scale nor the sum total of its notes. In an interview, Chaudhuri gave a brief introduction to the raga and described the evolution of his musical life, from childhood to “This Is Not Fusion.” These are edited excerpts from the conversation.

One of the first musical experiences I had was my mother singing Tagore songs. Growing up in Bombay, I remember the tranquil energy of her style; it wasn’t sentimental, but it was vibrant. Without realizing it, I was being drawn deeply into the sensuous immediacy of tone and tempo, and also a style that is precise, whose emotion lies in tone rather than in added sentiment.

Of course, there was also “The Sound of Music” and “My Fair Lady.” I spent a while infatuated with Julie Andrews. Then, when I was 7 or 8, my father bought a hi-fi record player, which came with a couple of complimentary records that I probably played a part in choosing without being informed in any way. I think one of them was by the Who, which I liked a lot; “I Can See for Miles” was one of my favorite songs. I also had a taste for the early Bee Gees, and of course the Beatles.

At 12, I started to play the guitar, and by the time I was 16, I was composing songs in a kind of singer-songwriter mold. Yet at the same time I began to be drawn to Hindustani classical music for the first time.

There were a few reasons. I had a teenage attraction to difficulty, and I was becoming more interested in complex tonalities. I was listening to Joni Mitchell, and I loved the fact that she could be melodious, kind of open-ended in her harmonic compositions, while at the same time quite complex. I also knew of people like Ravi Shankar, partly because of the Beatles. When we thought of Indian classical music, we basically thought of instrumental music: tabla players playing really exciting rhythmic patterns, getting applause at the end of their improvisatory spells, and of course the sitar and sarod. Vocal music seemed to be a little out of the way, arcane.

But then I heard Vishmadev Chatterjee — what an amazing voice. And at this time, there was also this man, Govind Prasad Jaipurwale, who began teaching my mother Hindi devotionals. I realized that while teaching her, he was doing tiny improvisations with his voice, which pointed to a different kind of imagination and training. I began to be receptive to the kind of Indian classical music that had always been there, but which I had shut out. I asked my mother whether I could learn classical music.

For some time, different types of music lived alongside one another. I played a bit of rock guitar. And I worked on an album that I thought was my way of becoming a singer-songwriter. My song “Shame” comes from that time. Its tune begins with the note C-sharp, then with the word “shame” in the chorus returns to C-sharp. It goes to that note after touching C — so chromatic notes are introduced at the end of the chorus, with a degree of estrangement, as the chords are C major and A major. Here, I think I was already responding to the way notes in North Indian classical music create a hypnotic effect through small shifts.

Then I began to practice Indian classical music a lot, about four and a half hours a day. And I spent a lot of time listening to music, trying to comprehend what is happening with the time cycles, then trying to sing to them and improvise. So obviously that began to take over some of the other musical activity.

You cannot introduce notes which aren’t there in the raga, but you can slow it down. You can evade presenting the delineation immediately. That evasion is partly where the imagination and the creativity lie. You could climb up to the octave, and then you are done with what’s basically a cluster of notes that could be sung in a minute in a song. But doing this over 30, maybe even 40, minutes — that becomes an expansive idea of creation, not just delineating or stating, but finding different ways of saying. That’s what’s at work here, in the khayal form especially.

The expanded time cycle allows you to explore these notes, to make the ascent and descent very slowly. The ear might recognize the fast version of the ektaal rhythmic system, which sounds like the normal version.

Now, when that added space occurs, you don’t keep time in an ordinary sense, but you are aware that the 12 beats of the ektaal have been multiplied, each one by four beats, until it ends, and you come back to the beginning.

So there’s this kind of time remaining to sing and elaborate a bit on the progression. That’s an extraordinary modernist development. You can hear it in the raga Darbari by Ustad Amir Khan. It’s an amazing recording.

Ragas are basically found material. Indians might say there are 83 of them, or a thousand; I don’t know. No more than maybe 50 ragas are sung today in the North Indian classical tradition. And maybe there are 30 that you hear over and over again, taking into account the fact that we don’t hear the morning and afternoon ragas because concerts are in the evening.

That’s because ragas have specific times and seasons. The raga Shree is associated with twilight and evening.

And the raga Basant, which has almost the same notes, is sung in the spring.

If architecture is a language with which to understand space and time, so is the raga. It’s also like language. For instance, you don’t use the word evening to refer to morning. Similarly, you don’t sing the morning raga Bhairav in the evening. With recordings, though, you can, if you wish, listen to ragas at any time of the day. Until the recording studios came along, ragas came to life only ephemerally.

So this was primarily the music that I practiced. The singer-songwriter had gone into permanent retirement. But by the late 1990s, that zeal of the convert that had possessed me when I was younger had passed, and I began to return to my record collection and listen to Jimi Hendrix. Bent notes, the blues, the raga Gujri Todi — all of that came together as I was listening. A moment of “mishearing” occurred when I thought I heard the riff to “Layla” in that raga.

A week or two later, it happened again. I was standing in a hotel lobby and someone was playing this Kashmiri instrument, and suddenly it seemed to launch into “Auld Lang Syne.” Of course, it wasn’t. But then I thought: Is it possible to create a musical vocabulary — not to bring things together consciously, East and West, but to capture the kind of instability of who I am and the richness of what I had discovered in that moment. And that’s why I call it “not fusion.”

“Summertime” happened around the time that I was creating these pieces. In it, I’m improvising on the raga Malkauns, but within the form of “Summertime,” an early kind of jazz composition based on the blues. I’m showing that it’s possible to improvise on Malkauns according to this form, which is what a jazz pianist does. But I’m bringing in another tradition.

The same thing is happening in “Norwegian Wood.” I’m taking the raga Bageshri and improvising on the space that each bit gives me. “I once had a girl, or should I say she once had me” — that gives me space to improvise on those notes. What I’m doing is a feature of khayal. That’s why I would say again, it’s not fusion, because fusion artists don’t do that. What they do is, they sing their own stuff in a Western setting.

Exploring these ideas has been deeply satisfying. Has my musical journey come full circle? I have not gone back to becoming a singer-songwriter, but I have brought together everything I know. If you’re a creative artist, the things you know tend to come back to you in some way. I’m very lucky that happened to me.