Hong Kong, Its Elections Upended, Reconsiders Its Dream of Democracy | Press "Enter" to skip to content 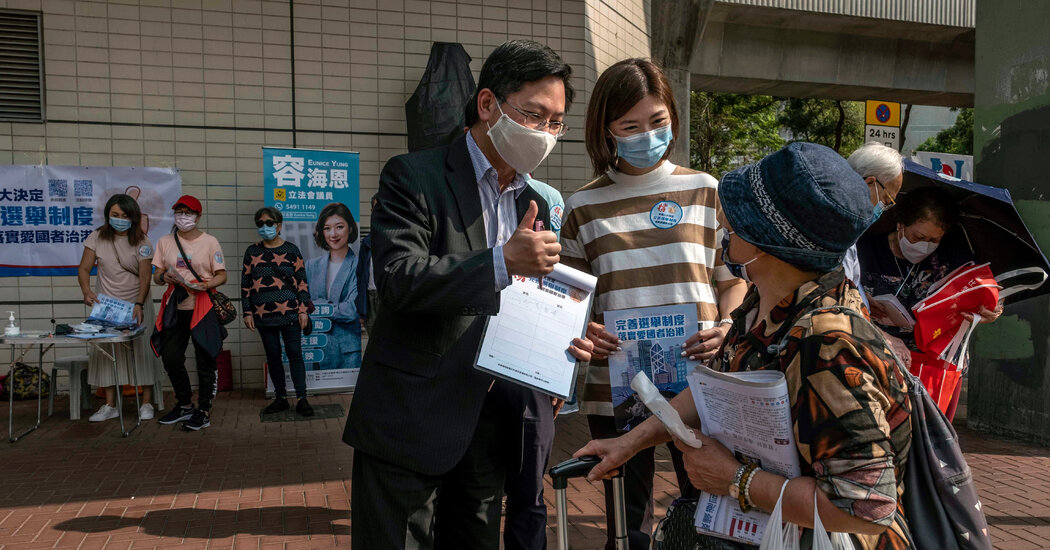 Hong Kong, Its Elections Upended, Reconsiders Its Dream of Democracy

HONG KONG — From her first protest at age 12, Jackie Chen believed she could help bring democracy to Hong Kong. Each summer, she marched in demonstrations calling for universal suffrage. She eagerly cast her ballot in elections.

“If we continue to participate in this game, it’s like we’re accepting what they’re doing,” she said. “That would make me feel like an accomplice.”

The Chinese government has upended the political landscape in Hong Kong, redefining the city’s relationship with democracy. Its plan to drastically overhaul the local electoral system, by demanding absolute loyalty from candidates running for office, is leaving factions across the political spectrum wondering what participation, if any, is still possible.

Self-declared moderates aren’t sure they would pass Beijing’s litmus test. In the opposition camp, political leaders have slowed their voter registration efforts and are unsure if they will try to field candidates again.

The changes to the voting system signal the gutting of a promise that has been central to Hong Kong since its 1997 return to Chinese control: that its residents would some day get to choose their own leaders, rather than being subject to the whims of London or Beijing. That promise is enshrined in the Basic Law, Hong Kong’s mini-constitution, which pledges that universal suffrage is the “ultimate aim.”

Beijing has now made clear that it has no plans to meet that aim — at least, not on the terms that many Hong Kongers expected. The changes are also likely to slash the number of directly elected seats in the local legislature to their lowest levels since the British colonial era, meaning the majority of lawmakers would be picked by government allies.

Though officials still nod to universal suffrage, theirs is a circumscribed version. A Chinese official in Hong Kong suggested last week that establishment lawmakers chosen through small-circle elections, of the type favored by Beijing, were equivalent to those elected by the general public.

“The establishment camp is also pro-democracy,” the official, Song Ru’an, told reporters. “They’re all chosen through elections, and they all work on behalf of the people.”

Indeed, many of Beijing’s supporters see the changes as a step toward more, not less, democracy. If the central government trusts Hong Kong’s electoral system, the thinking goes, it may be more willing to grant those long-promised rights.

At a street stall where he was collecting signatures in support of the electoral changes, Choi Fung-wa, 47, said he shared many Hong Kongers’ goal of one day voting for the city’s top leader. That person, the chief executive, is currently selected by a group of 1,200 people dominated by pro-Beijing interests. Mr. Choi, who moved to Hong Kong from the mainland 33 years ago, said he, too, wanted a sense of ownership over the outcome.

But he felt the opposition camp had alienated the authorities by sometimes using violence and by demanding universal suffrage too quickly. (The Basic Law raised the possibility that the chief executive could be popularly elected as early as 2007, but Beijing has repeatedly delayed.)

Screening candidates would ensure that future politicians were more moderate, Mr. Choi said. “Right now we have people who want to mess things up,” he said, standing under a giant Chinese flag that his group had erected on a sidewalk in North Point, a working-class neighborhood where support for the government runs high.

“There will be a new pro-democracy wing that comes out, and they probably will actually want to act in the interests of the people,” Mr. Choi said.

Hong Kong’s electoral system has always been skewed in favor of the establishment, but many residents had still hoped their votes could send a message.

Then the authorities arrested 53 people in January for participating in an informal primary ahead of those elections. The elections themselves were postponed for a year, and officials say they may be delayed again.

Ms. Chen, the democracy supporter who is unsure about voting again, said the electoral changes were more disheartening than the national security law.

“Voting isn’t organizing anything or trying to subvert the government,” she said. “It’s just each person voting to express their individual views. If we don’t even have this basic right, then I just don’t know what to say.”

Beijing has said the changes are meant to block candidates it deems anti-China, or who have openly called for independence for Hong Kong. But moderates also worry that they will be shut out of the new system.

Hong Kong’s politicians have long described their role as juggling the demands of two masters who are often at odds: Communist Party leaders in Beijing, and the people of Hong Kong. But Beijing has increasingly insisted that its will come first, a mandate crystallized in the new election rules, which allow only “patriots” to hold office.

That demand holds little appeal for Derek Yuen, 42, who had planned to run for the legislature as a self-declared centrist. He had criticized the authorities’ handling of the 2019 protests as needlessly confrontational, but he had also once worked for a pro-Beijing political party and called the protesters’ demands unrealistic.

But he feels he would be unable to win the approval of the new screening committee without hiding his views. “I’m not a genius ass-kisser,” he said with a laugh.

Mr. Yuen, who holds a Ph.D. in strategic studies, said he would focus on writing commentaries and policy proposals that would allow him to stay involved indirectly.

“I like to be in politics,” he said, “but there are just way too many constraints.”

Such retreats seem to be a broader goal of the electoral reforms, and of Beijing’s crackdown more generally. Hong Kong has long had a reputation for valuing a flourishing economy over political engagement, and the Chinese authorities have encouraged that.

In a sign of how deeply the last two years have ruptured the city’s way of life, some pro-democracy Hong Kongers have greeted the idea of a reprieve from politics with resignation, or even cautious optimism.

Whenever elections rolled around, Ho Oi-Yan, 40, voted for pro-democracy candidates. In 2019, she, along with hundreds of thousands of others, took to the streets to protest China’s encroachment on the city’s freedoms.

Though she moved overseas that fall, she flew back soon afterward, just to back the pro-democracy camp in local elections. She waited almost two hours to vote, sending photos of the line to other newly energized friends.

Yet Ms. Ho said she would set her passion aside if the local economy improved and she could return.

“I would go back and just not talk about politics and live,” she said by telephone. “When you need to make a living, then you have no choice.”

Some believe that trying to extinguish Hong Kong’s democracy will only harden the opposition’s resolve.

After the police ended a mass movement for universal suffrage in 2014, many supporters worried that dreams of democracy were dead. But when those demands resurfaced in 2019, the crowds ballooned.

Faith in that resilience has shaped the life of Owen Au, who was in high school in 2014. Invigorated by those protests, he enrolled at the Chinese University of Hong Kong to study politics. He was elected president of the student union. He dreamed of running for higher office.

He knows that is impossible now. He is facing charges of unauthorized assembly related to the 2019 protests, and he said he would never qualify under the candidate-vetting system anyway.

But far from pushing him out of the political arena, Mr. Au said, the crackdown will guarantee that he stays in it. He expects that no major company will hire him. Besides activism, he doesn’t know what else he could do.

“I have no choice but to keep working on it,” he said. “But it’s not a bad thing. Most of the other paths, I’m not so interested in. But this one could ignite my hope.”