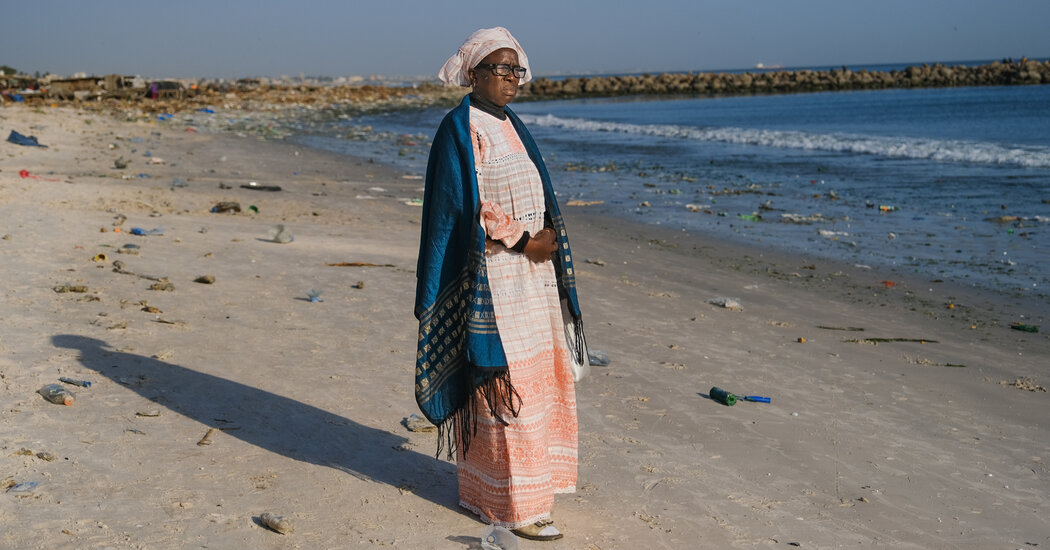 Spurred by Tragedy to a Life of Female Empowerment

THIAROYE-SUR-MER, Senegal — Sometimes when she’s alone and looking at the sea, Yayi Bayam Diouf imagines the silhouette of her son passing over the waters offshore.

Not usually the sentimental type, she softens when asked about the personal tragedy that would spur her to challenge her town’s traditional patriarchy and become a path breaker for female empowerment.

It happened in the spring of 2006, when her son, Alioune, a 26-year-old fisherman, went on a yearly trip to the normally rich fishing grounds off Mauritania with others from their town of Thiaroye-sur-Mer, an impoverished suburb of the Senegalese capital, Dakar. But the catch was lean, and they were reluctant to return home with little to show for their efforts.

Instead, he and about 80 others crowded onto his fishing boat and headed to the Canary Islands on a route called “Barsa wala Barsakh,” or “Barcelona or die” in the local language, Wolof. They vanished along the way, and their bodies were never found.

“I wish I had at least seen his body,” Ms. Diouf said. “Sometimes I wonder if he really died. One day, I was out in the sea fishing and I really thought I saw him pass by. It hurts a lot. It’s very hard to talk about him.”

That set her on a course that has led to a plethora of awards for community activism — a photo in her house shows her receiving a medal from Senegal’s president, Macky Sall. She has encouraged dozens of women to set up not just fishing operations, but also hair and clothing shops, as well as businesses making soap and makeup, all supported with microfinancing from government and nonprofit sources. In 2015, she used a grant from U.N. Women Senegal to build a farm to grow mussels, providing work for about 100 women.

But all that came later. Ms. Diouf says that after Alioune’s death she felt drawn to the sea and began thinking of leaving her office job to fish. Yet she faced resistance in the form of a patriarchal culture that expected women to stay in the home and men to work outside.

When she approached a group of community leaders one night after evening prayers seeking permission to fish, she was told that “the water doesn’t need women.” Moreover, they said, one of the traditions among the Lebu ethnic group common in the area was that women couldn’t touch the fish if they were menstruating.

“I told them, ‘That’s fine — I already went through menopause,’” said Ms. Diouf, who is herself Lebu. “I am now feeling so self-confident, and I want to transmit that to other women.”

Ms. Diouf had one other card to play. For years, thousands of men had left Thiaroye-sur-Mer in pursuit of better lives abroad, or died trying — 374 fatalities from 2003 to 2019, a local group estimates. There simply were not enough men left, she said, warning that the town’s economic survival depended on incorporating women into the work force. At length, they relented.

“I had to win them over,” she said. “It takes strength of character and commitment to do this.”

Her first name, “Yayi,” means “mother” in Wolof, and she thinks it’s fitting, because she wasn’t satisfied with just winning the right to fish for herself. She was determined to extend the right to work to every woman.

But first she had to get started fishing. She procured a license — the first woman ever to get one — then borrowed a little over $100, enough to rent a boat and pay for the gasoline. The fishing part came naturally, she says. “I was born by the water,” she said. “I swim better than a fish.”

Ms. Diouf says she was also driven by a sense of the injustice women that faced in traditional Senegalese society.

“I grew up watching my mother carry 30 or 40 kilos of fish,” she said, a backbreaking 65 to 90 pounds. “It always hurt me that women’s labor wasn’t recognized,” she added. “For years, I saw women working hard processing the fish caught by their sons or husbands, selling it at the market, and they didn’t profit from it.”

To remedy that, Ms. Diouf established a center to train women to fish, to handle their catch in better sanitary conditions and to treat fish stocks as an important resource rather than something to be plundered.

Around the same time, she also created the Women’s Collective for the Fight Against Illegal Immigration to persuade young men to resist the dangerous temptation to take to the high seas and instead make a life at home.

Not surprisingly, she is constantly on the move. When she is not busy at the training center, she is pushing women to start small enterprises, finding funds for micro credits or wrestling with government officials to bolster the struggling economy of Thiaroye-sur-Mer.

On a Wednesday morning in January, a few women set up a small table in front of the training center to sell fish, juice and breakfast items to the arriving students and the fishermen and women when they return from the sea, one of many such micro-businesses she has encouraged.

That morning, Ms. Diouf didn’t have much time for pleasantries or small talk. Hastily grabbing a plate from the women, she rushed into the training center, which stands across the bay from the island of Gorée, a point of departure for millions of Africans after they were sold into slavery.

Inside, the walls of Ms. Diouf’s office are decorated with photos of her in a pirogue and wearing an orange life jacket. She was scheduled to meet that day with a Fishing Ministry representative to complete the paperwork for a donation of equipment to improve sanitary measures in fish processing.

She then changed into her work clothes, went back outside to collect fish that had been cooking on the grill and set about preparing a meal for journalists at a local television station.

Ms. Diouf was born into a fishing family in Thiaroye-sur-Mer. As was typical then, her father did the fishing and her mother helped with the processing. In this polygamous culture, she says she isn’t sure how many siblings she has, maybe 15.

She lives alone while her husband, a government worker she married when she was 17, lives with his stay-at-home second wife. Ms. Diouf says she’s happy with the arrangement.

“I realized that in order to be autonomous I needed to buy my own roof,” she said. “I don’t want to depend on my husband or on anyone.” She rents out rooms to families, and neighborhood children regularly pop into her living room to watch educational videos on her computer.

One afternoon after work, she accompanied a young fisherman to Dakar to seek financing for his project to restore traditional and sustainable fishing in the face of industrial fishing enterprises that badly deplete fish stocks.

Ms. Diouf also has another calling beyond her community work.

Standing on the beach, she says she recalls her last conversation with her son, when she urged him not to do something so foolish as to gamble with his life as a migrant. Now, she often walks the garbage-strewn beach to speak to other young men, to persuade them never to attempt the perilous crossing to the Canaries.

“I tell them that no matter the hardships, never get on the pirogues,” she said. “I tell them, ‘Do you want what happened to me to happen to your mother?’ I have convinced some to stay that way.”