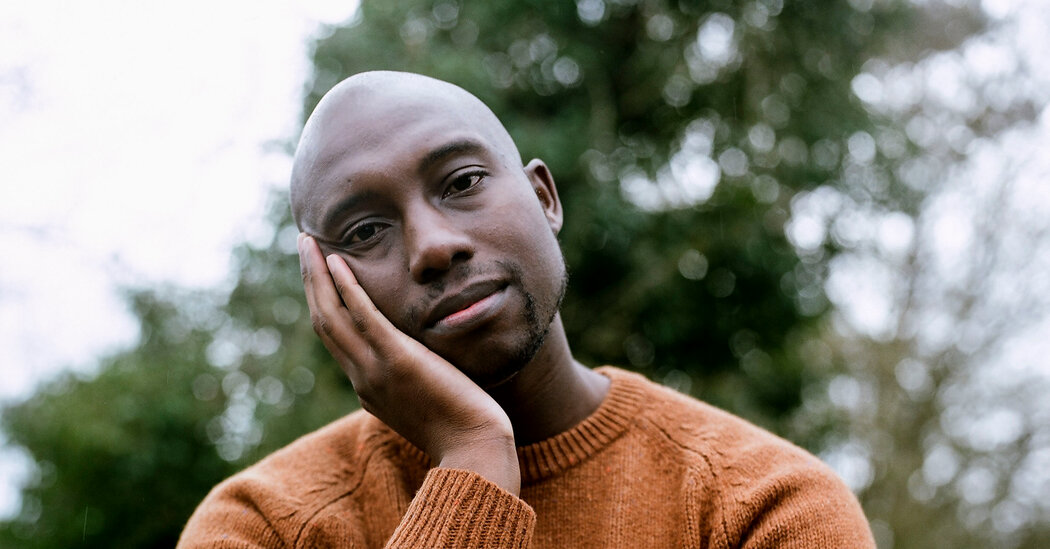 Last December, Caleb Azumah Nelson visited Tate Britain to see “Fly in League With the Night,” an exhibit featuring the painter Lynette Yiadom-Boakye. In her portraits, he didn’t just see figures and backgrounds, he heard things too: the music of Miles Davis, Ebo Taylor, Solange — the songs the artist had been listening to as she conjured her characters.

“A tradition of rhythm rendered on canvas in blues and greens, yellows and reds,” Azumah Nelson wrote in his review of the show. “In this way, it is possible to see something and to hear it too, and I wonder if this is what feeling is.”

To read Azumah Nelson’s own fictional portrait — Black Cat, a Grove Atlantic imprint, releases his debut novel, “Open Water,” in the United States on Tuesday — is to sit with a similar kind of synesthesia. In prose interspersed with a Kendrick Lamar or A Tribe Called Quest lyric here, a scene from “Moonlight” or a Roy DeCarava photograph there, the unnamed narrator tells a story of falling in love, and then fighting to stay there.

The narrator is a photographer who gets involved with his friend’s ex-girlfriend, a dancer, while they work together on a project to document Black life in London. Their relationship swells and evolves over the course of the book, but the narrator is also aware of the white world they inhabit, one where Black men and women are targeted by the police, where a patrol car follows him outside his own home. A world that makes the narrator afraid just to live, let alone love.

Though the events in the book aren’t real, the emotions were so personal to Azumah Nelson that as he tried to translate them into words, he often found that there were none. In those moments, the 27-year-old writer, who is also a photographer, turned to music and visual art as a way in.

“With images, and more recently with some of my work with sound, I’ve been trying to work out how I can go from feeling to expression,” Azumah Nelson said in a video interview from the flat he shares with his partner in London. For every ineffable emotion, he described a painting, a Donald Rodney photograph, a track by Isaiah Rashad, D’Angelo, Frank Ocean. (He also directed a minute-long trailer for the book and compiled a Spotify playlist whose selections include Curtis Mayfield, Erykah Badu and Lizzo.)

His upbringing helps explain his multigenre approach to storytelling. Azumah Nelson grew up with either a book, camera or violin in his hand, he said, raised by parents who emigrated from Accra, Ghana, to England as teenagers. He and his younger siblings have lived their entire lives in South East London, where “Open Water” is set.

“It’s where my world begins and ends,” Azumah Nelson said. “It’s just this place that I know I’m going to be writing about for so long.”

Every Friday as a child he’d go with his mother, a midwife, to the local cinema, where they’d watch the same film again and again until the theater changed it over. “We didn’t care,” he said. “We just liked to be in a dark room among strangers, sitting and absorbing something.”

When Azumah Nelson was 11, his family traveled to Accra for his grandmother’s 80th birthday, and his father, who works in the food industry, brought along a camcorder. Looking back on the jerky footage now, he admits the camera ended up in his hands for most of the trip. “From quite a young age there’s just been this want in me to document,” he said. “Specifically Black people. I’m really grateful for those trips to Ghana, because I got to see what it could mean to be in a place where you’re the majority.”

Back in London, his education would take him far away from that kind of place, from his close-knit, predominantly Black primary school to the elite Alleyn’s School in the affluent neighborhood of Dulwich. It was his first exposure to wealth and to the “supreme confidence” it can confer.

Azumah Nelson attended on a full scholarship, one of only four Black people in his class of about 120. He often felt out of place, except when he was on the basketball court. Since deciding he wanted to be a writer and artist at 16, he said, “there was this real reckoning with myself and who I was in my identity, and how I saw myself, but also how other people saw me.”

That feeling of being seen — not just known, but safe — is a refrain in “Open Water.” Its main characters by turns notice, watch, envision, desire and misunderstand each other, at the same time that they see police officers seeing them in certain ways, too — something else Azumah Nelson poured into his book from painful personal experience.

“Open Water” started as an essay collection that several literary agents rejected before Seren Adams at United Agents read it and offered to represent him.

“The voice and the tone were there, the rhythm,” Adams said, but she suggested Azumah Nelson weave those elements into a narrative focused on the couple. He not only went back to the drawing board, but he “did what every crazy person does,” he said. “I quit my job.”

Instead of writing between sales shifts at the Apple Store, now he could spend eight hours a day at the British Library, facing one blank page after the other without mapping where he was going. He looked so distraught in the process that every other day the same librarian would come to check on him.

“I’d be sitting there writing these scenes with the police, or about discrimination,” Azumah Nelson said. “I left everything I had on the page.”

In the first big sale of her career, Adams submitted the resulting manuscript to British publishers in September 2019. The response was immediate, and overwhelming: Azumah Nelson met with 15 publishers the next week, and the process culminated in a nine-way auction before it sold to the editor Isabel Wall at Viking. Not long after, Katie Raissian at Grove Press bought the U.S. rights. The two edited it together with Azumah Nelson.

“I didn’t — I still don’t — really know much about the publishing industry, so I didn’t know that’s not how it usually goes,” Azumah Nelson said. When Adams emailed him with the list of bids, he was having coffee with his mother. He was so nervous he asked her to read it to him.

“She read each one, one by one, and she was like, ‘Caleb, your life is about to change,’” he said.

It has. Upon its U.K. publication on Feb. 4, “Open Water” reached No. 16 on the Nielsen BookScan chart and went into a third printing within a month. The independent seller Kirkdale Bookshop and Lewisham libraries, including Azumah Nelson’s local branch, dedicated window displays to the novel, promoting it to passers-by even as the pandemic has forced stores and libraries to close.

Recalling that day with his mother, her pride, Azumah Nelson began to cry. For some emotions, he said, “language really has its limitations.”

“It doesn’t take much for something you say to not be heard in the way that you said it,” he said. Or, “more often than not, for you to feel something and not say anything at all.”

Sometimes we don’t need to. In Yiadom-Boakye’s painting “Lie to Me (2019),” a woman stands reading aloud from a book, facing a man who is seated, separated from her across the space between canvases. To Azumah Nelson’s eye, he is beholding her.

There is an echo of this tableau in the prologue to “Open Water,” in which “the barber caught you watching her reflection in the mirror as he cut her hair, and saw something in her eyes too.” No words are exchanged between them. The gaze is enough.