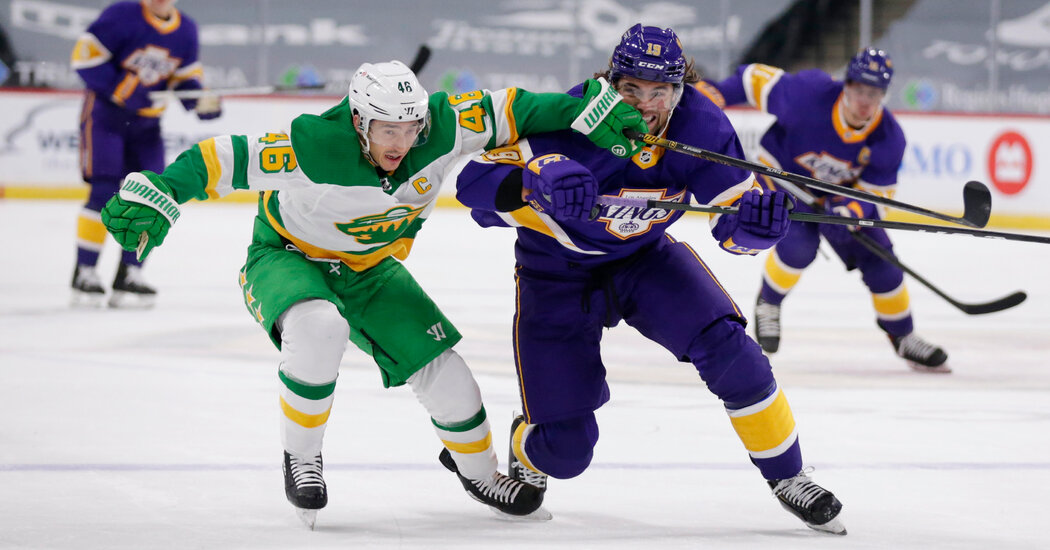 March may bring a bit more normalcy to the N.H.L. season, as nearly half of the league’s 31 franchises will likely have begun allowing at least some fans to attend games by the end of the month.

But February brought its share of oddities and reminders of the perils of playing a hockey season through the coronavirus pandemic. Two teams played a seven-game series — unusual, if not unheard of, outside of the playoffs — because of schedule adjustments prompted by the virus.

There were also postponements due to the uncommonly cold weather and power outages in Texas.

In the midst of the disruptions, some teams have managed to excel. Two teams pulled off six-game winning streaks and the Central’s top contenders all closed the month strong.

By the end of March, most teams will have played half of the 56-game schedule and will have an idea of their place in the playoff race with the April 12 trade deadline looming.

All statistics are updated through Tuesday’s games.

The Islanders surge, and the Kings surprise.

Kevin Lankinen, a 25-year-old rookie goalie, has continued to be an unlikely but welcome steadying presence for Chicago, which surged in February. With a 9-3-3 record, he has helped Chicago to playoff position in the Central Division behind Florida, Tampa Bay and Carolina. All four teams earned at least 13 of their previous 20 possible points through Feb. 28.

The East Division also has also been competitive, with Washington and the Boston Bruins barely leading two rising teams, the Philadelphia Flyers and the Islanders.

The Islanders have their own rookie sensation in net and have excelled at home this season. Their 8-2-2 February record was the best in the division and they improved their record at home to 7-0-2 in their final season at Nassau Coliseum. The rookie goaltender Ilya Sorokin, 25, made just two starts in February, but both were shutouts to supplement the veteran Semyon Varlamov, who has three of his own. Sorokin became the eighth goalie in N.H.L. history to record shutouts in each of his first two victories.

Philadelphia was so short-handed because of virus-related absences that at times it was playing defensemen as forwards. The Flyers rebounded with three straight wins and two consecutive shutouts to close February.

While most of the top teams in February had rolled over success from recent seasons, two unlikely franchises equaled the Lightning’s league-best six-game win streak. First, it was the Los Angeles Kings, who finished last in the Western Conference in 2019 and needed a seven-game win streak to close last season to avoid the same fate. Their streak was snapped by the Minnesota Wild, who were on a six-game win streak of their own before losing to the first-place Vegas Golden Knights on Monday.

The Kings, one of the league’s youngest teams, have been fueled largely by the resurgence of the remaining veteran core from their Stanley Cup wins in 2012 and 2014. Center Anze Kopitar, defenseman Drew Doughty and wing Dustin Brown have rediscovered their peak form and production, while goaltending and special teams have also aided L.A.’s turnaround.

Minnesota, on the other hand, has been buoyed by young forwards who have complemented their mobile, veteran defense corps brilliantly. Center Joel Eriksson Ek and wing Jordan Greenway have played their way from the third line to the first, now teaming up with wing Kevin Fiala. And the Wild’s second line was scorching during the team’s streak.

For scoring, look to the North.

Edmonton Oilers center Connor McDavid and Toronto Maple Leafs center Auston Matthews are scoring at breakneck paces. McDavid posted 18 points in February, after having a league-high 22 in January. Realignment put McDavid and Matthews in the same division, but there’s plenty of scoring beyond them. Five of the top six scorers in the N.H.L. through Feb. 28 played in the North, including Toronto’s Mitch Marner and Edmonton’s Leon Draisaitl.

Matthews had an N.H.L.-best 12 goals in 11 February games. He had a goal-per-game pace through his first 18 contests. That scoring rate has been maintained only seven times in seasons with at least 49 games played. Matthews did not score a goal in his last two games against the Calgary Flames, and also sustained a wrist injury that kept him out of two games against McDavid. Behind Matthews and Marner, Toronto continues to lead the division, giving its long-suffering fans a new level of optimism. While the pivots McDavid and Matthews have been the headliners on the marquee of their generation, two wings have been the biggest names among the 30-and-over crowd this season.

Chicago’s Patrick Kane, 32, closed the month with a milestone, becoming the ninth player born in the United States to score 400 goals. Kane’s leaderboard-topping 24 February points increased his total to 34 over all, tying him with Draisaitl for second in the league.

Washington’s Alex Ovechkin, 35, is set to rise another notch on the career goals list. His 713th goal, on Sunday against the Devils, placed him four behind Phil Esposito for sixth, and 18 behind Marcel Dionne for fifth.

Bruins right wing David Pastrnak was also among the top performers with nine goals and eight assists in February, including a hat trick in the second of two outdoor games played at Lake Tahoe.

The pandemic upending the schedule has become familiar, but a series of shuffles because of virus-related issues within the Colorado Avalanche and Minnesota Wild pitted two of their West Division foes against each other in a manner normally reserved for the postseason.

The St. Louis Blues and Arizona Coyotes’ two-game set eventually turned into seven straight games as the schedule shifted. Fittingly, had the series been in the postseason it would have gone the distance. The teams split the first six games before Arizona won the seventh, 1-0.

The Dallas Stars had another set of games postponed. After being the first team this season to be affected by a virus outbreak in January’s training camp, they had four February games postponed because of power outages and extreme weather conditions in Texas. In total, a dozen games were rescheduled.

The N.H.L. and its franchises recognized Black History Month with tributes to pioneers like Willie O’Ree, who became the first Black player to skate in an N.H.L. game in 1958, and with Black people in hockey sharing their own words through essays and interviews.

O’Ree was prominently featured in the festivities. Teams wore special warm-ups, many adorned with patches that had O’Ree’s likeness on one shoulder and Black History Month emblems on the other. The Bruins were set to retire his number, but they postponed it to next season in hopes that fans would be able to be in the stands.

Kane, Florida Panthers wing Anthony Duclair and Toronto Maple Leafs forward William Nylander were among those who sported skates with a portrait of O’Ree and the phrase, “All I needed was the opportunity.” Toronto wing Wayne Simmonds, who also wore a pair, had a hand in their design. The skates will be auctioned off to benefit the Black Girl Hockey Club.

Published in HOCKEY and LATEST