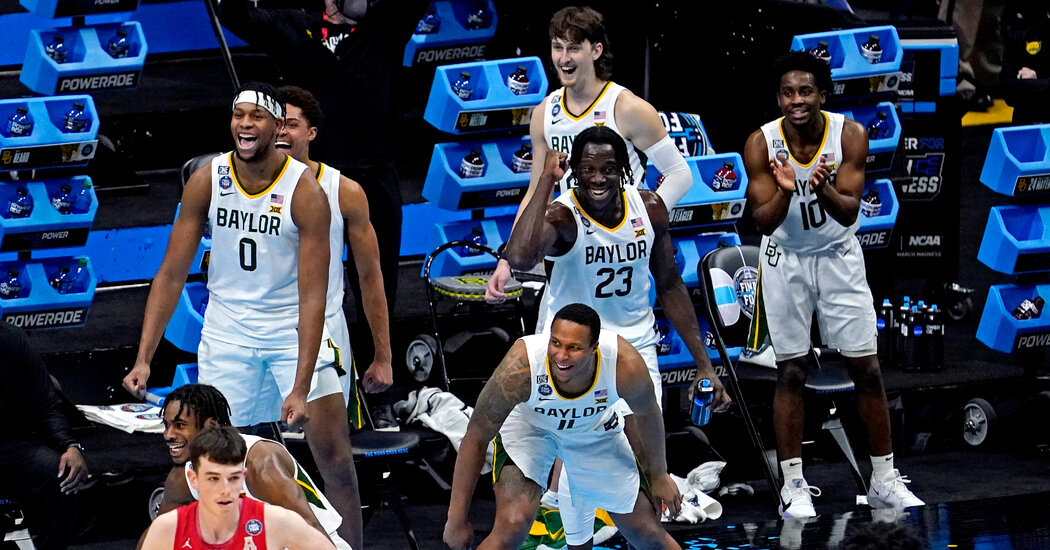 INDIANAPOLIS — When Jared Butler left Alabama in the summer of 2018, enrolling at Baylor just before his freshman year started, he walked into what was a middling program, one that had not reached the N.C.A.A. tournament the prior season and had been known for its early flameouts.

His eyes were on what was in front of him — competing for a starting job, getting adjusted to college and winning as many games as possible.

“Could I believe it three years ago?” Butler said on Friday. “No.”

Here the Bears are, though, having arrived not just at the Final Four for the first time since 1950, but on the cusp of winning their first national championship. They looked the part on Saturday night, overwhelming Houston, 78-59, in a national semifinal by rediscovering their deadeye 3-point shooting and unleashing a clampdown defense.

The win moved Baylor into Monday night’s title game against undefeated Gonzaga, which beat U.C.L.A. in a thriller that ended with Jalen Suggs hitting a 3-pointer as time expired in overtime. That set up a match four months in making, with a Baylor-Gonzaga game here in Indianapolis canceled in December just 90 minutes before tipoff because of a positive cases in the Baylor program. The atmosphere for that game, which would pit the teams who have been ranked atop The Associated Press Top 25 poll almost all season, almost certainly would not match the anticipation.

Contemporary Final Fours have long grown beyond mere basketball games into mega events, played in cavernous football stadiums and accompanied by weekend-long entertainment. The tipoffs, accompanied by a sea of flashbulbs, carry a palpable energy.

This one is noticeably muted because of the pandemic, from the absence of throngs of fans carousing through downtown Indianapolis on Friday night, to the large curtain that divided Lucas Oil Stadium in half — limiting the crowd to less than 10,000. (The semifinals drew a record 72,238 here in 2015.)

Also absent, as they have been throughout the tournament, are the team’s cheerleaders and bands — such a staple of the men’s tournament that the N.C.A.A., through its television contract, is required to transport them to the Final Four.

“It still feels like we’re playing basketball,” Butler said. “We go back to the hotel. It’s just us, us the team. And we just got one mission, one goal. I think it will sink in later on in life or maybe two months from now when I’m, like, wow, we’re really in the national championship game.”

In trying to create a more customary aesthetic for television, the organizers filled many of the empty seats with cardboard cutouts — often including schools’ famous basketball players. Occupying several seats were Michigan’s Cazzie Russell, the Fab Five and a more recent star, Trey Burke. Elgin Baylor, in a Seattle University jersey, occupied another. As did a startlingly clean-shaven Justin Turner — in his Cal State Fullerton baseball uniform.

Turner’s presence was a reminder that, while the men’s and women’s tournaments have largely proceeded uninterrupted — the Virginia Commonwealth men were the only team to leave the tournament because of virus cases — playing in a pandemic can be a capricious exercise. Turner, the third baseman for the Los Angeles Dodgers, was pulled near the end of the clinching Game 6 of the World Series because of a positive test.

There was no such intervention on behalf of Houston on Saturday.

The Cougars, playing in their first Final Four since 1984, had their mettle tested on path to a national semifinal — rallying from 10 points down to beat Rutgers and mustering enough to finish off Oregon State after blowing a 17-point lead — but they only had to beat double-digit seeds to get there.

Houston carried with it an intransigent defense team whose senior guard, spindly DeJon Jarreau, locked down two of the tournament’s hottest scorers, Syracuse’s Buddy Boeheim and Oregon State’s Ethan Thompson. But it is hardly an exaggeration to suggest that the Cougars’ best scoring option is an offensive rebound. They led the nation in offensive rebounding percentage, according to KenPom.com, grabbing 39.8 percent of their missed shots.

The Cougars’ first possession had to give Baylor Coach Scott Drew pause when Reggie Chaney and Justin Gorham grabbed offensive rebounds for Houston before Marcus Sasser sank a wide-open 3-pointer.

It turned out to be the last hurrah for Houston.

Baylor locked down everybody but Sasser, securing the defensive boards and assailing the Cougars defense with a hail of 3-pointers. When Davion Mitchell swished a 3-pointer at the halftime buzzer, it put them up 45-20 — all but giving them a pass-through to Monday night.

The Baylor defense shackled the entire Houston offense with the exception of Sasser, who scored 17 of his team’s 20 points in the first half. Everyone else was a combined 1 for 15 at halftime.

The Bears, who were the best 3-point shooting team in the country during the regular season, regained their form — especially Butler, who made 4 of 5 behind the arc and scored 17 points, all in the first half. His backcourt mates, Mitchell and MaCio Teague, contributed mightily with 12 points and 11 assists for Mitchell and 11 points and 6 assists for Teague.

And while Houston did manage 14 offensive rebounds, those were offset by 13 by Baylor and the Cougars’ 38.2 percent shooting.

If Baylor can replicate Saturday’s performance, it would cap a lengthy climb from an ignominious depth.

Drew was hired in 2003 after one of the N.C.A.A.’s most horrific scandals — one Baylor player murdered another and the coach at the time, Dave Bliss, instructed players to lie to investigators, who uncovered a variety of rule breaking in the program. The Bears were hit with severe penalties, including a ban on nonconference games in 2006, and won 21 games total in Drew’s first three seasons.

They reached respectability eventually. And they took advantage of broken brackets to reach regional finals in 2010 and 2012. Those accomplishments came amid an N.C.A.A. investigation that found that Baylor coaches had made 1,200 impermissible phone calls or texts to recruits and Drew was cited for failing to monitor his program.

Now, though, the Bears are one game away from a title that few, including their star guard, might have seen coming.