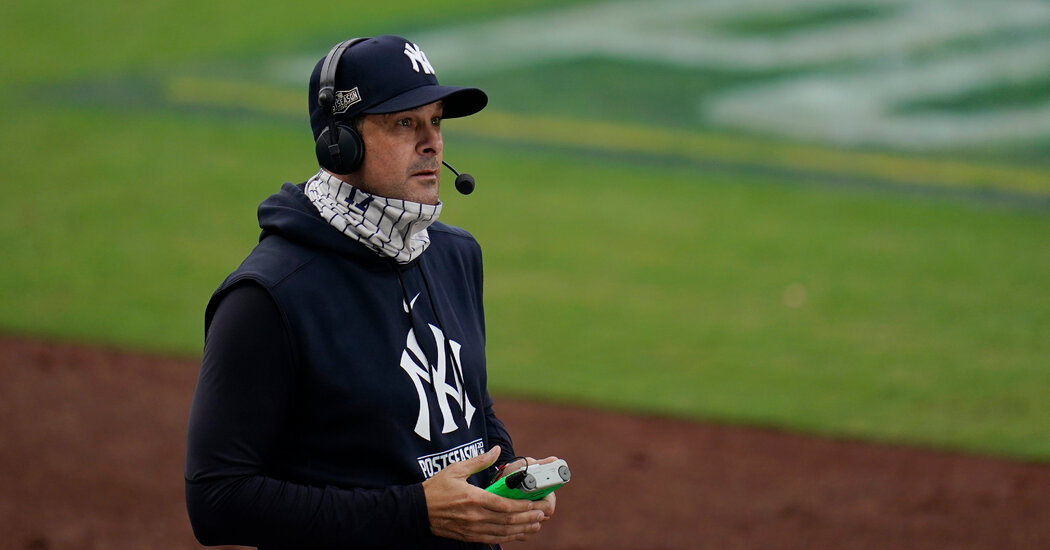 Yankees Manager Taking Leave of Absence to Get Pacemaker

Yankees Manager Aaron Boone said he expected to be absent from the team for a short time because of ongoing heart issues. The Yankees said Boone, 47, has undergone surgery on Wednesday in Tampa, Fla., where he is overseeing the team’s spring training ahead of the 2021 season. He received a pacemaker.

“My faith is strong, and my spirits are high,” Boone said in a statement issued by the team before the procedure. “I’m in a great frame of mind because I know I’m in good hands with the doctors and medical staff here at St. Joseph’s Hospital.”

Boone, a Yankees hero during the 2003 playoffs who has been their manager since the start of the 2018 season, underwent open-heart surgery in 2009 while with the Houston Astros to fix a problem with his aorta and aortic valve. He returned later that year to play the final 10 games of his 12-year playing career.

Over the past six to eight weeks, Boone said, he experienced “mild symptoms” of lightheadedness, low energy and shortness of breath. He said he underwent tests and examinations by heart specialists in New York before spring training. While the heart checkup came back normal, he said, there were signs of a low heart rate. After more medical consultations in Tampa, Boone said, he needed a pacemaker.

Boone called his immediate medical leave of absence “short term” and said he looked forward to returning to work “in the next several days.” The team issued a statement after the procedure saying it went as expected.

A married father of four children, he said his doctors were confident that the surgery would allow him to resume all of his usual professional and personal activities “and afford me a positive long-term health prognosis without having to change anything about my way of life.” He urged people dealing with heart problems to remain vigilant.

“Staying on top of your health is always the first and most important thing you can do for yourself and your family,” he said.

After the team’s announcement, Yankees General Manager Brian Cashman said in a video news conference that he wasn’t aware of anything that would prevent Boone from returning to normal and handling the rigors of a 162-game regular season.

Concerned at first, Cashman said Boone put him at ease recently when explaining his medical condition and that the procedure would require only a brief visit to the hospital. Cashman said Boone could be back as early as 48 to 72 hours, but that would hinge on his recovery and M.L.B.’s health and safety protocols during the coronavirus pandemic.

From the hospital bed earlier on Wednesday, Boone took part in the daily video call for coaches and staff, and also recorded a video for players. He joked and smiled on the call.

“That made me and all of us feel a lot better,” said Yankees bench coach Carlos Mendoza, who will serve as the acting manager during Boone’s absence. Mendoza added later, “We’re praying for him.”

The team’s ownership is focused on Boone’s health rather than his return.

“Our only priority at this time is Aaron’s health and well-being, and we will support him in every way throughout his recovery,” Hal Steinbrenner, the Yankees’ managing general partner, said in a statement.

Under Boone, the Yankees have a 236-148 record and have reached the playoffs each season. He is the first major league manager to win 100 games in each of his first two seasons. Heading into the 2021 season, the Yankees were again considered a World Series contender.

Published in BASEBALL and LATEST