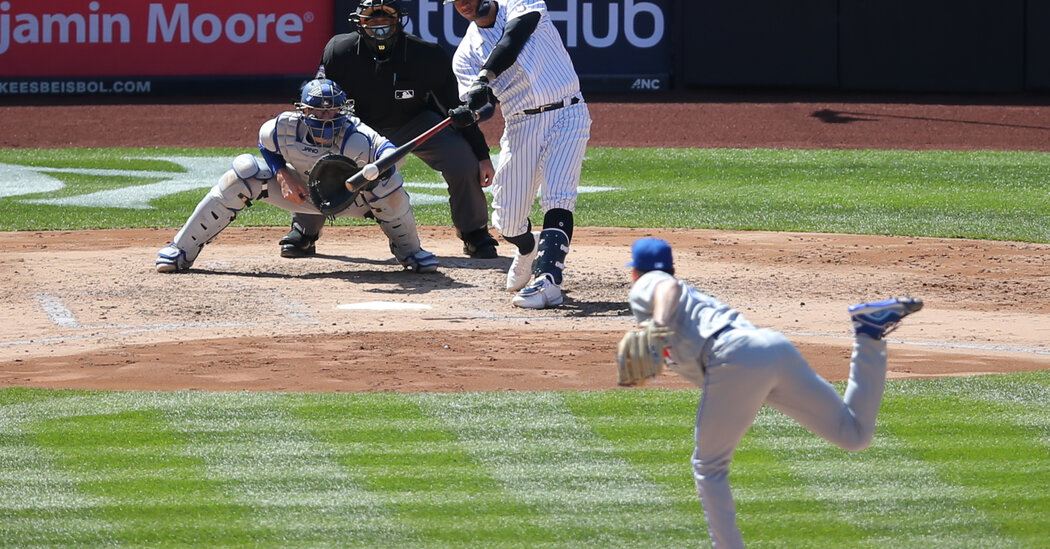 Gary Sanchez joined Elston Howard in 1963 as the only Yankees catchers to homer in each of the first two games of the season and Jay Bruce blooped a two-run single in the seventh for his first hit with his new team in the Yankees’ 5-3 win over the Toronto Blue Jays on Saturday.

Two-time Cy Young Award winner Corey Kluber, limited by injuries to one inning in the previous two seasons, pitched around control problems to allow one earned run over four innings in his Yankees debut.

Left-hander Lucas Luetge also made his first major league appearance in six years. Chad Green got Rowdy Tellez to swing under a 96 mile-per-hour pitch to strand two on in the eighth and got a four-out save in the absence of Aroldis Chapman, who completed a two-game suspension for throwing near the head of Tampa Bay’s Mike Brousseau last Sept. 1.

A sellout crowed of 10,107 — capacity was limited to 20 percent under New York State coronavirus restrictions — was noticeably louder than during Thursday’s 3-2, 10-inning loss. Brett Gardner, a 37-year-old fan favorite, got loud cheers when he replaced Clint Frazier in left field to start the eighth.

Pitching in long sleeves on a 44-degree afternoon, Kluber threw 37 pitches in the first two innings, more than double his 18 last season. His 2019 season ended that May 1 when hit on the forearm by a comebacker, and his debut for Texas in the 2020 season lasted just one inning when he tore a muscle in his right shoulder on July 26.

Winner of the 2014 and 2017 Cy Young awards for Cleveland, Kluber is a right-hander who turns 35 next Saturday and is seeking to re-establish himself with the Yankees, who gave him an $11 million, one-year deal. He struggled with his control, allowing three walks, five hits and costly wild pitch in four-plus innings with five strikeouts. The Yankees’ defense helped him by turning double plays in the first two innings.

Called “Klubot” for his reserved, robot-like manner, he is among three Yankees starters coming off long layoffs. Domingo German starts Sunday in his first appearance since Sept. 18, 2019, after completing a suspension under Major League Baseball’s domestic violence policy. Jameson Taillon will start on Wednesday against Baltimore after recovering from an elbow injury that had sidelined him since May 1, 2019, and required his second Tommy John surgery.

A.L. batting champion D.J. LeMahieu legged out a two-out infield hit in the second that allowed Gio Urshela to come home from third, but Toronto tied the score in the third with a pair of walks a wild pitch followed by Sánchez bouncing a throw into center for an error as Marcus Semien stole second for the second time.

Sanchez homered for a 2-1 lead in the fourth, and Tyler Chatwood entered with two on and allowed singles on consecutive pitches to Aaron Judge and Aaron Hicks.

Hick had a run-scoring hit off the glove of a diving Semien at second. Hicks also has struck out three times each in consecutive games for the first time in his nine-season career.

Published in BASEBALL and LATEST