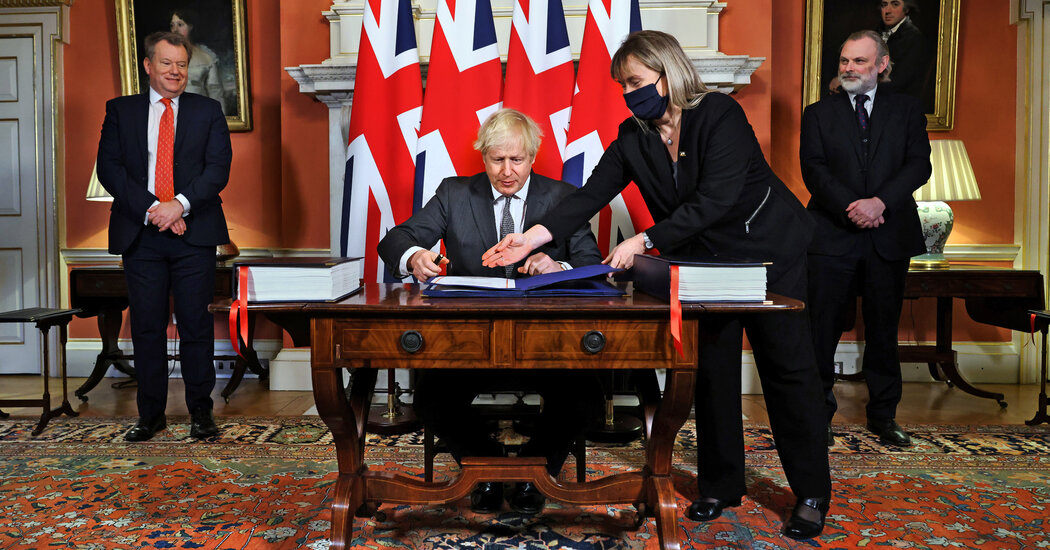 Want to get The Morning by email? Here’s the sign-up.

Good morning. “No realistic path” for a quick vote on $2,000 stimulus checks, Mitch McConnell says. The U.S. vaccine campaign is off to a slow start. But first: Brexit.

More than four years after Britain voted to leave the European Union, new travel and trade rules will go into effect tomorrow, concluding a saga that has divided Britons and dominated British politics.

The two sides reached an agreement last week, after nearly a year of trade negotiations. Yesterday, Britain’s Parliament approved the deal. Tomorrow brings the end of free movement of people between Britain and the E.U.

I talked to Mark Landler, The Times’s London bureau chief, about what it all means and what comes next. (Our conversation has been edited for brevity.)

CLAIRE: How will the new relationship between Britain and the E.U. affect people’s everyday lives?

MARK: The purpose of the 1,200-page trade deal between Britain and the E.U. was to avoid very disruptive changes, such as tariffs and quotas. But there will be an array of other bureaucratic requirements that did not exist before Jan. 1.

People won’t see a sudden shift in the price of fresh fruit and vegetables in London supermarkets. But it’ll have an impact on Britons who, for example, want to bring their dog on vacation to the continent or who want to get a job somewhere in the E.U.

Trade. Travel. Anything else?

Britain withdrew from the Erasmus exchange program, which allowed British students to study in E.U. countries and vice versa. It’s one highly visible example of things that will change in the post-Brexit era.

Something else, which may take a little bit longer to play out, is this idea of separatism and independence. Scotland, for example, was against Brexit, and it could fuel a new push to break off from the rest of Britain.

What will this mean for Britain’s economy?

A lot of stuff still needs to be negotiated. A major driving force of the British economy is the services sector, including legal, financial, consulting and other services. Virtually none of that is covered yet in the trade agreement.

How did the pandemic affect the process?

Without it, the negotiations for the trade deal would have been the biggest story in the country. But Brexit was almost completely overshadowed by the coronavirus. Britain is preoccupied with this health crisis, which will muffle the immediate effects of Brexit. But over time those will become more visible. Which means that the debate over Brexit may not be finished in the country.

Will this deliver the “global Britain” that pro-Brexit campaigners hoped for?

One of the driving arguments in favor of Brexit was throwing off the shackles of the E.U., so that Britain would become this agile, dynamic, independent economy that could strike deals with everyone in the world. But rising protectionism and populism have made making free-trade agreements harder. The “global Britain” arguments looked more valid in May 2016 than in January 2021. In a way, the Brexit vision is four and a half years too late.

From Opinion: Here are the major trends that affected Americans this year, visualized in 11 charts by Steven Rattner, a former Obama administration official, and our colleague Lalena Fisher. They range from political polarization to job losses (pictured above).

Lives Lived: Dawn Wells radiated all-American wholesomeness as Mary Ann on the 1960s sitcom “Gilligan’s Island.” She stuck with the role even after the show went off the air, appearing as Mary Ann on several other programs including “Alf” and “Baywatch.” Wells died, of complications from Covid, at 82.

The year of fandom

In 2020, loving a singer doesn’t just mean liking the music. It means tracking your favorite artist’s streaming statistics with the zeal of die-hard sports fans. It means organizing online with other fans to boost album sales. It even means raising more than $1 million for charity to match a star’s donation.

Over the past decade, social media has helped turn fandom into a 24-hour job, The Times culture reporter Joe Coscarelli writes. And unlike admirers of sprawling franchises like “Star Wars” or the Marvel universe, music fans often devote all of their efforts to a single artist or band.

That makes it a lot more personal. “You see yourself in your favorite artists — you associate with them, whether it’s just the music or it’s their personality,” one Lady Gaga fan told The Times. “So when someone insults your favorite artist, you take that as a personal insult, and then you find yourself spending hours trying to convince someone in China that ‘Born This Way’ was her best album.”

To understand how pop music fandom got here, read the rest of Joe’s article here.