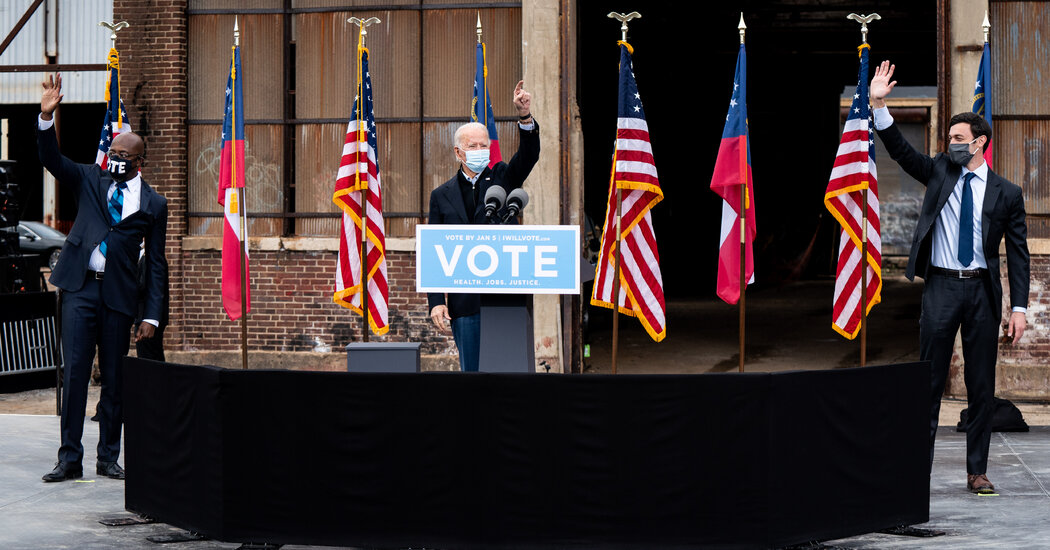 Both Mr. Warnock and Mr. Ossoff have run ads highlighting stock sales and business transactions made by Ms. Loeffler and Mr. Perdue after they received briefings on the coronavirus earlier this year, but before it had spread in the country.

“Kelly’s for Kelly,” one recent ad from Mr. Warnock’s campaign claims, after calling Ms. Loeffler the richest member of the Senate. “Warnock is for us.”

Even some of the ads that are meant to take the edge off the polarizing race slip in some attacks. In a new ad from Mr. Perdue, seven women are gathered next to a hearth, chairs in a circle, trading compliments about the first-term senator. But at the end, one woman adds: “I know that David is not going to defund our police, and he is not going to gut the military.”

Amid all the negative ads, television viewers in Georgia may or may not notice the increasingly national message. Indeed, the airwaves are becoming so saturated that political ads often run back to back, sometimes occupying entire commercial blocks for a full television show. In the past seven days, campaigns and outside groups spent more than $50 million on television, airing 88 unique political ads across Georgia.

Some days in December, more than a third of all ads in Georgia were political. In the 5 p.m. to 6 p.m. hour, home to local news broadcasts and a common target for political campaigns, more than 60 percent of all ads were political. Both figures outpaced the ad saturation during the general election, when numerous races were vying for airtime.

With so many ads blanketing the airwaves, political strategists and ad experts both concede that the returns can be diminishing.

“It’s like World War I, when they would sit there in the trenches and they would shell each other for weeks, but then nothing would happen because everyone was in trenches and bunkers,” said Ken Goldstein, a professor of politics at the University of San Francisco. He said it was like “shelling impenetrable bases.”