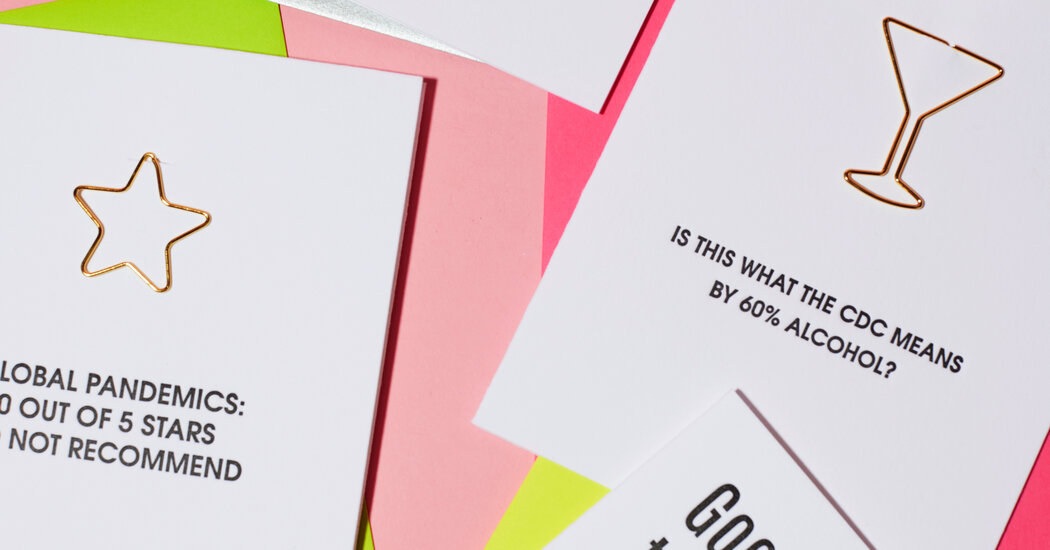 That was the opening salvo of an Instagram post last week from Lisa Krowinski, founder of Sapling Press, a letterpress design and print shop in Pittsburgh. Ms. Krowinski was reeling after Paper Source, the stationery chain with 158 stores, abruptly filed for bankruptcy on March 2. Her five-person business had fulfilled big orders from the chain in January and February, and was owed more than $20,000 for items like Father’s Day cards and tea towels.

The post attracted a slew of comments from other frustrated cardmakers — a niche industry dominated by female entrepreneurs — who were also concerned about whether they would get paid. Paper Source sent an email to vendors a day after it filed for bankruptcy, saying they would be paid in full for goods provided on or after March 2, and to file claims to retrieve the rest.

“As a community, we feel that we’ve been taken advantage of in a way that no small business should have been, especially coming off a pandemic,” said Ms. Krowinski, 46, who sold goods to Paper Source for nine years. “It hurt extra hard.”

Paper Source, founded in 1983, is the latest national retailer to file for Chapter 11 bankruptcy protection during the pandemic, a process that companies from J.C. Penney to J.Crew have used to keep their brands alive while getting out of store leases and cutting debt.

The difference with Paper Source is that vendors say that the company placed significant new orders for cards and gifts in the run-up to the filing, even pushing to expedite deliveries. Now, it is unclear how much money vendors will recoup. The vendors are largely creative women who run small businesses on their own or with a handful of employees.

“Women have already been so hurt in this pandemic disproportionately to men just in terms of the types of jobs we do and having families to take care of,” said Janie Velencia, the 30-year-old owner of the Card Bureau in Lorton, Va., which is owed $15,000 from Paper Source. “They did this to a bunch of female-owned companies during Women’s History Month and just before International Women’s Day.” (Paper Source is currently selling products celebrating those events.)

Paper Source is now dealing with the unusually public fallout with its vendors, who happen to be in the trade of sharp and skilled communication, as it aims to keep operating. The company, based in Chicago, made its January and February orders “with the thought process at the time that we actually avoid Chapter 11 and potentially have an investor come into the business,” Winnie Park, Paper Source’s chief executive, said in an interview. “Unfortunately, those options didn’t materialize.”

Ms. Park said that she was concerned about online “misinformation” about the bankruptcy, and that the company planned to create a webinar to help its more than 1,200 vendors understand how to file claims. She said that she hoped suppliers, roughly 250 of whom are cardmakers, would receive “normal or nearly full payments” through special financing for “critical vendors” and a court ruling that prioritizes suppliers whose goods were received in the 20 days before the filing.

“Our intention was never to hurt women and female entrepreneurs,” Ms. Park, 49, said. “We have gone through a pandemic that was longer and deeper than any of us anticipated, and we have a path forward that we want to engage these women entrepreneurs in.”

Still, three vendors shared emails from Paper Source in which the company offered them payments from the critical vendor fund that were between 10 percent and 30 percent of what they were owed. In exchange for the money, Paper Source said it needed confirmation that vendors would continue to provide goods to the chain, according to the emails, which were shared on the condition of anonymity because they were confidential.

Among the biggest sticking points with vendors are the January and February orders. They question whether Paper Source knew it was making purchases that it could not pay for — at least not on time. Paper Source typically pays for goods 30 to 60 days after they are received. According to court documents, the company started preparing for a Chapter 11 filing in early February after failing to obtain a capital infusion or interest from 138 potential buyers last year.

Alex Gagné Glover, the founder and chief executive of Chez Gagné, a seller of cards and drinkware in Los Angeles, said that Paper Source placed big new orders with her four-person company in December, January and February for letterpress-printed cards for anniversaries (“Doing this life thing with you is pretty awesome”) and friends (“you’re my soul sister”) and pushed for them to be delivered by the end of February. She thought the orders represented a glimmer of hope for post-pandemic sales. She said the chain now owed her more than $20,000.

“It’s just really shady they would place so many orders with so many small businesses before the bankruptcy filing,” Ms. Gagné Glover, 33, said.

Ms. Velencia said most of what she was owed came from orders this year. Sapling Press said it received its biggest order in months from Paper Source at the start of February. Steel Petal Press, a Chicago stationery and gift shop, said that it was waiting on five outstanding payments from Paper Source, including three orders made before the bankruptcy that it was asked to rush out.

“There was no reason to rush through a $7,000 Father’s Day order — those cards were not going on the shelf in the middle of February,” Ms. Krowinski of Sapling Press said.

Ms. Park said that the orders were not connected to the company’s bankruptcy. Paper Source has been trying to revive its inventory for months, she said, especially because it had to stock about 27 new locations that it acquired just before for the pandemic hit through the bankruptcy of Papyrus, its former rival. “We have been trying to get our inventory in greeting cards in a healthy position since last October when it was very clear we were really low in stock,” she said.

But the move amplified the vendors’ confusion. “The fact that January came and brands started getting these big orders, they were happy and excited thinking this was great, things are on the upswing again and then it was not the case,” said Katie Hunt, a business coach who works with stationery vendors through her company, Proof to Product. “The optics are bad.”

Paper Source, which has been privately held for years, is a relatively small retailer but a behemoth among stationery-makers, a friendly industry with regular trade shows and even “paper camps,” where aspiring cardmakers network and learn how to get their goods in bookshops and other chains, like Nordstrom. Because of its size, Paper Source is able to command concessions like longer payment deadlines. It has even solicited credits of up to $250 from vendors to help build new stores, according to emails reviewed by The New York Times.

Paper Source has about 1,700 employees, the vast majority of whom are hourly, and it posted gross sales of $104 million last year, down from $153 million in 2019, according to court documents.

Like many retailers, Paper Source’s sales plummeted last year as it grappled with shutdowns, capacity restrictions and “the wave of canceled weddings,” according to filings. It closed stores, eliminated jobs and cut the pay of senior managers. The company estimated that 30 percent of its formerly loyal shoppers have not visited a store or purchased from its website since the pandemic started.

Court documents show that it has more than $100 million in debt and leases that cost $36 million annually. The company, which was majority-owned by Investcorp, secured short-term financing as part of the filing and plans to sell itself to lenders by the end of May. Paper Source declined to comment on specific costs tied to its debt.

Many vendors said they understood that Paper Source was challenged by the pandemic. But while Paper Source can restructure, there is no guarantee of when or how much its suppliers will get paid.

“I don’t think anyone’s mad at Paper Source for filing for bankruptcy,” said Kyle Durrie, who owns Power and Light Press in Silver City, N.M., and is owed about $8,000 from Paper Source. “Where I think this is really hitting a lot of us hard is just feeling like we’re being taken advantage of, and we have no rights or recourse because of how small we are.”

While some vendors said that they would not work with Paper Source anymore, Ms. Park said she was optimistic that relations would improve with more education.