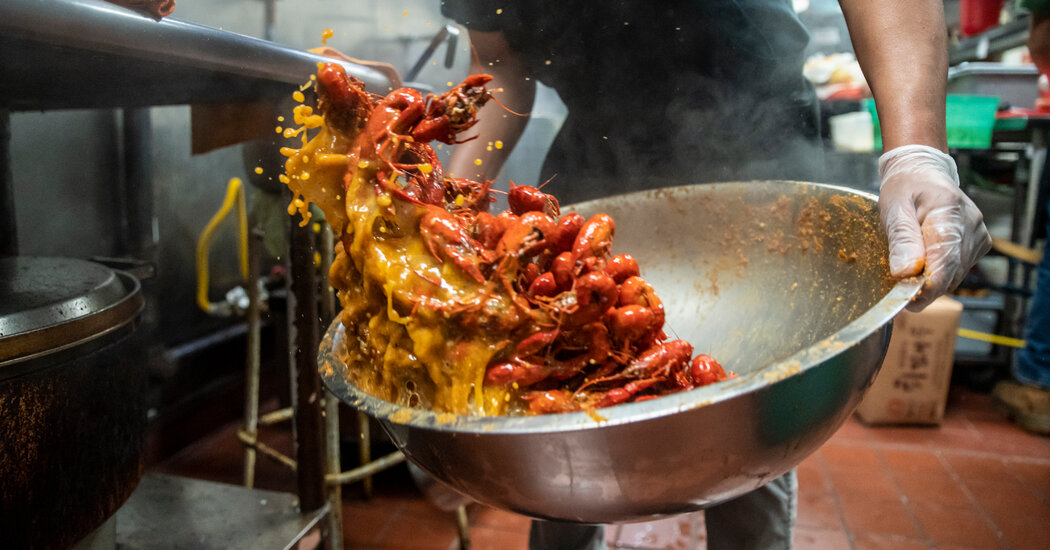 A Crawfish Feast Where the South Meets Southeast Asia

HOUSTON — In early March, a delivery truck carrying dozens of bags of live Louisiana crawfish arrived at Crawfish & Noodles. The restaurant, in a district known as Asiatown, is arguably Houston’s best-known purveyor of Viet-Cajun crawfish. The style expands the flavor profile of traditional South Louisiana whole boiled crawfish, with modified spice blends and a twist developed by Vietnamese-American chefs: a generous bath in seasoned butter sauce.

While Crawfish & Noodles serves its signature dish year-round, the restaurant is busiest in the spring, when crawfish are in season. Given how much business he lost during the shutdowns at the start of the pandemic last year, Trong Nguyen (below), the restaurant’s owner and head chef, feared that the winter storms that ravaged Texas in February — and delayed the crawfish harvest in Louisiana — would cause similar harm this spring.

“I need the high season to get through the slow season,” he said. “Last year, we didn’t get that.”

But as the delivery arrived, Mr. Nguyen was confident that his connections to crawfish suppliers in Louisiana’s Cajun country, roughly 230 miles east of his restaurant, would help him salvage the spring of 2021.

Restaurateurs across the country are tallying up the losses from a year of a rampant virus. In Asiatown, owners have also faced crippling winter weather and a rise in anti-Asian sentiment. For Mr. Nguyen, a haul of fresh crawfish is a welcome cause for optimism.

“These are called Grade A Select jumbo crawfish,” he said, resting his hand atop the three yellow mesh bags of live crustaceans at the rear of the truck.

“This kind is not available to anyone else right now, because of the freeze,” he said.

Nicholas Yxtos (below) carried one of the 36-pound bags into the kitchen and poured them onto a counter. He plucked and discarded the dead shellfish from the pile, pushing the rest into a sink full of water to soak.

Miguel Cotty, one of the chefs, was already preparing batches of crawfish for the dinner service, which had just started. The crawfish are boiled for three to seven minutes, depending on their size and the volume of the batch.

Mr. Cotty (below left) shook a powdered spice blend over a three-pound order and tossed it in a large metal bowl. He then poured several ladles of orange-red butter sauce over the crawfish and tossed it some more. He scooped the now glossy crawfish into a smaller metal bowl for serving and topped them with three spice-dusted pieces of corn on the cob.

Mr. Nguyen, 51, was a teenager when his family moved to Houston from Vietnam. He first tasted whole boiled crawfish while working at a casino in Lake Charles, La. It was the classic Louisiana crawfish boil, with a salty, cayenne-charged kick. “It was something I liked to eat, because it’s spicy,” he said.

Viet-Cajun crawfish emerged in Houston in the early 2000s. Mr. Nguyen opened Crawfish & Noodles with relatives in 2008, and since then has changed the spice blend and sauce recipe several times. For special events, he said, he occasionally uses a spice blend that includes ginger and lemongrass, a combination commonly found at Viet-Cajun crawfish places in the Gulf Coast region and in California, where the style is also popular. But garlic, onion, cayenne, lemon pepper and butter are the dominant flavors in his house recipe.

Jim Gossen, a retired local restaurateur and seafood distributor, recalls trying the butter-coated crawfish for the first time at Crawfish & Noodles, not long after it opened.

“They were really good, and really, really rich,” said Mr. Gossen, 72, who helped introduce traditional boiled crawfish to the Houston market in the early 1980s. “I have no proof, but I would venture to say that today they sell more crawfish in Houston than in Louisiana.”

Mr. Nguyen said early customers made fun of his restaurant’s name, and were routinely patronizing about his crawfish. “They say, ‘This is not how you cook the crawfish,’” he said. “I’d say: ‘I don’t cook Louisiana crawfish. It’s Vietnamese crawfish. My style is different.’”

By 2011, when Mr. Nguyen moved Crawfish & Noodles to its current location, the restaurant was well on its way to finding an audience. His wife, Alexa Nguyen, is its business manager. Later this year, the couple plan to open a second location of Crawfish & Noodles at the Houston Farmers Market, where their son, Cory, will work with Mr. Nguyen as chef.

“Is there a better-loved restaurant in all of Bellaire Boulevard’s Chinatown than Trong Nguyen’s mecca for Viet-Cajun crawfish?” Alison Cook, the restaurant critic of The Houston Chronicle, wrote in a 2019 review. “I doubt it.” Last year, Mr. Nguyen was a finalist for the James Beard Foundation award for Best Chef: Texas (though the foundation decided not to announce the winners of the chef and restaurant awards).

“We have a phenomenal amount of tourists coming in from all over the place,” Mr. Nguyen said. “People drag in suitcases, directly from the airport.”

He was now sitting at a banquette in the dining room. It was the first day that Covid restrictions were completely lifted in the state of Texas, and his restaurant was nearly full. It was a welcome sight, particularly considering the decreased business Asiatown restaurants have experienced in the pandemic because of baseless, racist fears that they are more likely to spread Covid.

Some customers, Mr. Nguyen said, “even told us they didn’t want to come to our area. They started coming back now.”

Wearing a glove to sample one of his just-cooked crawfish, he tore off a tail and bit into the severed head, then sucked. It’s the best way, he said, to taste the spices blended with the butter and juices of the shellfish.

At an adjacent table, Andrew Duong (above right) was eating his second meal at Crawfish & Noodles in a week. Mr. Duong, 27, was visiting from Chicago, where he said he runs a restaurant that also specializes in Viet-Cajun crawfish. It’s a measure of how far the style has spread beyond the Gulf Coast, parts of Georgia and California in recent years.

“It’s booming up in Chicago,” he said. “But it’s not like down here, where you see crawfish everywhere.”

Dymond Simpson (those are her hands, above) and her husband, Alexander (below), are regulars at Crawfish & Noodles. The Houston residents both have family connections to Louisiana, and grew up eating Louisiana-style crawfish. They tried Mr. Nguyen’s crawfish for the first time in 2015.

“At first I thought it had too much stuff on it,” Ms. Simpson said. “Then it grew on me.”

The couple, who were eating with their three young children, come to Crawfish & Noodles once a month, “even when it’s not crawfish season,” said Mr. Simpson. He particularly appreciates that the restaurant cooks crawfish to order so it arrives hot, a departure from many Louisiana-style places, where crawfish is often sold at room temperature.

Ms. Simpson said her children were already devoted fans. “They love this crawfish,” she said. “For birthday parties, we don’t do pizza or hot dogs. We do crawfish.”