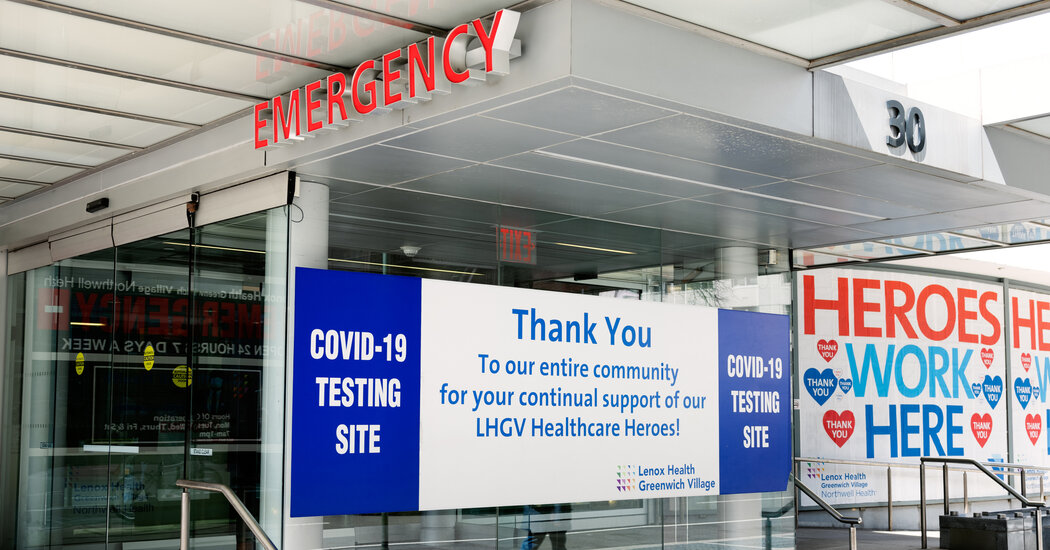 Lenox Hill Hospital in Manhattan advertised its “Covid-19 Testing” on a large blue and white banner outside its Greenwich Village division’s emergency room. The banner said nothing about cost.

But cost turned out to be the testing’s most noteworthy feature. Lenox Hill, one of the city’s oldest and best-known hospitals, repeatedly billed patients more than $3,000 for the routine nasal swab test, about 30 times the test’s typical cost.

“It was shocking to see a number like that, when I’ve gotten tested before for about $135,” said Ana Roa, who was billed $3,358 for a test at Lenox Hill last month.

Ms. Roa’s coronavirus test bill is among 16 that The New York Times reviewed from the site. They show that Lenox Hill arrives at its unusually high prices by charging a large fee for the test itself — about six times the typical charge — and by billing the encounter as a “moderately complex” emergency room visit.

In one case, a family accrued $39,314 in charges for 12 tests this winter, all taken to fulfill requirements for returning to work or school. In another, an asymptomatic patient walked in because she saw the banner outside and wanted a test after traveling. Her insurance was charged $2,963.

Federal legislation last year mandated that coronavirus testing be free for patients, so individuals are typically protected. None of the patients tested at the Lenox Hill emergency room were billed directly for the service. But eventually, American patients bear the costs of these expensive tests in the form of higher insurance premiums.

“It felt like deception, and an effort to try and get money that they are not entitled to,” said Ute Tabi. She was reviewing her family’s insurance claims and saw a $2,793 charge for a drive-through coronavirus test her husband got at a Northwell hospital in the New York suburbs, Huntington Hospital on Long Island. The hospital pursued the family for a share of the bill, which Ms. Tabi has so far refused to pay.

Northwell Health, a nonprofit, operates 23 hospitals in the region, and received about $1.2 billion in emergency health provider funding in the federal CARES Act last year.

The chain recently came under scrutiny after The Times revealed it had sued more than 2,500 patients for medical debt during the pandemic. It has since dropped those cases.

Northwell, which defended its coronavirus testing charges as appropriate, has since removed the blue signs at the Greenwich Village division advertising the service.

Officials said patients tested at the emergency room received more advanced care than they would elsewhere. They declined to comment on specific patient cases but said their protocols involve notifying patients that their test will come with emergency room fees. A sign with the information is taped to a plexiglass shield at the registration desk.

“I don’t think of the emergency room as a testing site,” said Barbara Osborn, Northwell’s vice president for communications.

But the Lenox Hill in Greenwich Village has tested 15,000 patients for coronavirus over the course of the pandemic. Patients interviewed by The Times said they went there because of the banner outside, not to seek emergency care. They were asymptomatic and seeking tests as a precaution before traveling or socializing.

“I called my insurance and was freaking out, asking who has my identity, what will this bring,” she said. “After maybe 45 minutes, I got transferred to someone who was able to tell me that this was all about a Covid test.”

Americans have taken about 370 million tests during the pandemic. The price of each — as with most services in the American health system — can vary widely from one hospital or doctor’s office to another.

State-run testing sites in New York do not charge patients or collect health insurance information for the coronavirus nasal swab tests. A study published last year found that a swab test at a hospital can run from $20 to $850. Some independent laboratories have charged more, billing $2,315.

The Lenox Hill Greenwich Village center bills $671 for its coronavirus test, six times what major labs such as LabCorp and Quest charge. The rest of the price discrepancy comes from the emergency room fees.

Doctors and hospitals that bill higher prices for testing can rely on new federal protections to ensure they are paid. Congress passed a law last year that requires insurers to fully cover coronavirus testing costs and not apply any patient co-payments or other fees to the service.

Insurers must also pay for services that are necessary to obtain the coronavirus test, such as a doctor’s visit or, in the case of Lenox Hill, an emergency room facility fee.

“This is such a gold mine for hospitals because now they can charge emergency fees for completely healthy people that just want to be tested,” said Renee Hsia, a professor of emergency medicine at the University of California, San Francisco, who researches medical billing. “This is what you’d expect from a market-oriented approach to health care. It’s the behavior our laws have incentivized.”

Emergency rooms in the United States typically charge patients something called a facility fee, the price of walking through the door and seeking care. The fees have risen sharply in recent years, and can cost about $200 for a simple visit or $1,800 for the most complex cases.

Hospitals like Lenox Hill often defend these costs as necessary to fulfill federal laws that require them care for all patients regardless of their ability to pay.

“If someone does not have insurance, we still provide the same level of care as we would to someone who has insurance,” said Rich Miller, Northwell’s chief business officer.

Emergency room fees are common in the American system but rare in the world of coronavirus testing. At The Times’s request, the data firm Castlight Health analyzed insurance claims for 1.5 million coronavirus tests.

It found that less than 4 percent of coronavirus tests are billed through emergency departments. The vast majority of those tests are associated with large claims that have many charges, suggesting the nasal swab was incidental to a more complex visit.

Only about 5,000 bills out of the sample of 1.5 million — about 0.3 percent — were billed in a way that looked similar to Lenox Hill’s fees, the Castlight data shows.

At the Lenox Hill site, Mr. Miller explained, there are actually two separate coronavirus testing processes. Patients who arrive with a doctor’s order for a coronavirus test are routed to a service center that does not charge emergency room fees.

Patients who come in without that prescription are sent to the emergency room for an evaluation, where they will incur the facility fee charges. About 75 percent of coronavirus tests at Lenox Hill Greenwich Village are routed through the emergency room, a practice Mr. Miller defended.

“Anyone who would have been billed for an emergency room visit would have been assessed accordingly to see if other things were wrong with them,” Mr. Miller said. “We believe we’re adequately disclosing that this is an emergency department visit, and will be billed as E.R.”

Founded in 1857, Lenox Hill has long served a wealthy clientele at its main division on the Upper East Side of Manhattan. It is where Beyoncé gave birth in 2012, and is the subject of an eponymous Netflix documentary series that shows the hospital’s inner workings.

In 2010, New York State awarded Lenox Hill the rights to take over the Greenwich Village building left empty by the closing of St. Vincent’s Hospital. It replaced it with a free-standing emergency room.

It would stay open 24 hours and provide care to patients regardless of their ability to pay. But unlike traditional emergency rooms, it is not physically attached to a larger hospital.

Free-standing emergency rooms have proliferated in recent years, across the country and across New York City. Montefiore, Northwell and N.Y.U.-Langone have all opened them within the last decade.

Supporters have praised them for expanding critical care access without building an entire hospital, a potential boon to underserved urban and rural areas.

But they have also faced criticism for how they price care, especially for simple visits. One analysis conducted by the health insurer UnitedHealthcare found that the average cost for a visit related to a common condition like a fever or cough was 19 times higher in free-standing emergency rooms than in urgent care centers.

The prices at Lenox Hill’s free-standing emergency room caught the eye of local government officials shortly after it opened. New York City’s Community Board 2, which has jurisdiction over Greenwich Village, held a meeting in 2016 to discuss several cases. One patient was charged $1,000 to have a bee sting looked at, and another faced fees of $3,000 related to a sprained ankle.

Sarah Nathan was not looking for emergency-level care when she was tested at Lenox Hill Greenwich Village. She just needed a test to return to her job as a nursery school teacher.

The bill for her visit came to $3,194, which her insurance negotiated down to $2,084. She recalls asking a front desk representative whether she would be billed for an emergency room visit. She said she was told she would not be.

Ms. Nathan worries about the impact these high fees could have on her premiums.

“My insurance is so expensive already, and it infuriates me that they’re adding to the cost of that for New Yorkers,” she said.

Coronavirus tests were scarce at the start of the pandemic, but have since become plentiful, raising questions about why Lenox Hill advertised testing at this site.