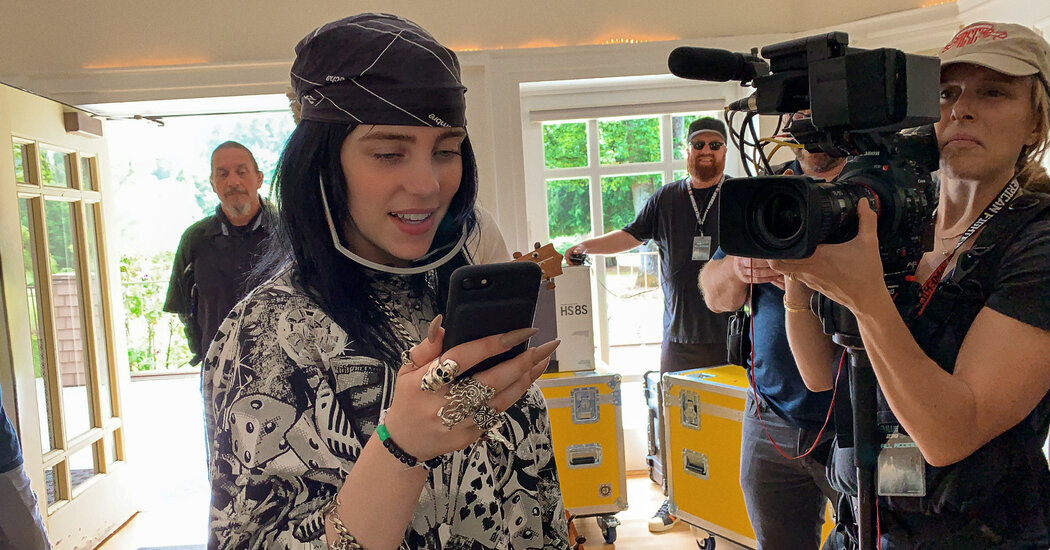 Billie Eilish, the ultramodern pop star who’s both colorfully gothic and establishment-friendly, is a fascinating subject: vividly creative, offhandedly vulnerable, barely visibly self-conscious. And also, a teenager. “Billie Eilish: The World’s a Little Blurry,” the new documentary about her rise, finds her shaping global aesthetics while cocooned in a close-knit family, and treats both circumstances with equal casualness. In this film, all of Eilish’s interactions are human-scale, or smaller.

“Blurry” — directed, with determined informality, by R.J. Cutler (“The War Room,” “The September Issue”) — doesn’t tell a story about Eilish so much as sit back and presume that one will unfold. Which, of course, it does. Her 2019 debut album, “When We All Fall Asleep, Where Do We Go?,” is the product of countless home bedroom recording sessions with her brother, Finneas, who produces all of her music. That album goes on to earn her five Grammys. Cameras were there throughout.

And yet “Blurry” isn’t triumphant, strictly speaking. Instead, it relies on the accretive power of the mundane. It moves forward without narration, and sometimes without narrative rhythm — often it feels almost observational, like a nature film. The abundance of footage, and the space it’s given to breathe — the movie is almost two and a half hours long — captures the restless loneliness of superstardom.

Eilish’s approach to that fame is both game and shrugging. Her songwriting is visceral and often dark: she shows the journal in which she draws ghoulish scenes and writes poems that may become lyrics, including, in all caps, “I WANA END ME.” Even when the film shows fans clamoring for Eilish, it remains resolute in centering her. In footage drawn from various concerts around the world, the sound focuses tightly on her vocals, turning even arena shows into sites of outrageous intimacy.

At times, “Blurry” suggests greater friction happening just out of sight, gently spotlighting the tug of war between Eilish and the expectations placed upon her. Closing in on completing the album, Finneas grumbles, “I feel like I’ve been, like, told to write a hit, but I’ve been told to not tell Billie that we have to write a hit.” Later, when Eilish and Finneas are recording her song for the James Bond film “No Time to Die,” she mopes over the theatrical belting it requires: “I’m gonna get made fun of by the internet when I do it.”

Toward the end of the film, as she’s touring her album around the world, fissures appear. Her ankle finally gives out at a show in Milan, and in New York, she bristles at the after-show circus of photo ops with hangers-on, and then again when someone posts online that she had been rude. At Coachella, a frisky, eyes-bugged Orlando Bloom (paramour of Katy Perry) offers hugs backstage, and Eilish also awkwardly meets Justin Bieber, her childhood idol. Bieber is a recurring character here, as an abstract deity, then a generous collaborator, and also as a symbolic foil, a reminder of what happens when teen stardom goes awry.

Eilish appears unlikely to unravel before the cameras. Stars are being filmed constantly now anyhow — the gap between social media videos and actual film is shrinking with each passing iPhone camera improvement. That advertorial content has extended into the domain of documentary film isn’t novel anymore.

So on the one hand, it’s noteworthy that a rising star like Eilish granted heavy access to a filmmaker long before her debut album was even completed. That is a fragile time, with no guarantee of success, to permit to be captured for posterity.

And yet even when Eilish is besieged or bedraggled, there is never anything other than a sense of safety in this footage. The boilerplate language that appears at the end of the film’s credits reminds why: “Interscope Records is the author of this cinematographic or audiovisual work.”

Billie Eilish: The World’s a Little Blurry
Rated R. Running time: Running time: 2 hours 20 minutes. In theaters and on Apple TV+. Please consult the guidelines outlined by the Centers for Disease Control and Prevention before watching movies inside theaters.